HOW DO SOLAR PANELS WORK?​

You probably already know what solar panels do – but do you know how they work?

The process of turning sunshine into electricity might seem complicated at first, but it’s actually relatively simple when you break the technology down.

The Solar Energy Industries Institute claims that the solar energy industry is expected to double in size in the next five years. Thanks to this growing popularity, we’ve found that more and more people are interested in a detailed breakdown of the process behind this incredible renewable energy source.

Today, we’re going to explain in detail how solar panels work. We’ll start with the actual science behind it (how they convert sunlight into electricity) and then explain what to expect in your home solar setup.

How Does a Solar Panel Work – The Science​​

How Does a Solar Panel Work – The Science

What Is Solar Energy?

Solar energy is energy that’s produced from the sun.

The sun is a natural source of energy, through a variety of processes, most notable nuclear fusion. It’s been producing this energy for billions of years.

Even before humans figured out how to harness this energy through solar energy systems, we’ve been reaping its rewards. In fact, solar energy is the original energy source, allowing us to stay warm, grow crops, and so much more.

The invention of solar panels and the associated solar energy systems have simply given us the ability to capture this same solar energy, in the form of sunlight and solar warmth, but this time convert it into electricity.

Although such technologies were first experimented with as long ago as the 1830s, by famous solar physicist John Herschel, it’s only been in the past few decades that solar energy has been truly refined into an incredibly useful product.

What Is a Solar Panel Made of?

A solar cell is also known as a photovoltaic solar cell (sometimes shortened to PV cell).

These photovoltaic cells are typically constructed from silicone. They contain both a positive and a negative layer.

In this way, these cells are similar in their construction to semiconductors, including their creation of an electric field thanks to the positive and negative layers.

The electric field is created in much the same way as a magnetic field, such as the large magnetic field that spans the earth between the two poles.

Although silicone, phosphorus, and boron are largely responsible for converting sunlight into electricity, a variety of other materials are used in the construction of a solar panel to help make this energy usable.

Metal conductive plates surrounding the solar panels help capture this newly created electricity before transferring it to electrical wires. This solar electricity can now be used in the same way as any other electricity source.

So, how does a solar panel collect the energy from the sun, create an electrical field, and convert this into usable electricity?

It starts with photons from the sun entering the atmosphere and hitting the photovoltaic cells. As each photon hits the cells, they knock electrons loose from their respective atoms.

These loose electrons then create an electrical field thanks to the positive (phosphorous) and negative (boron) layers in the solar panel.

The electrons flowing through this electrical field enable the solar panel to act similarly to a semiconductor. The flow of the electrons through the newly established electrical circuit begin to generate electricity.

This electricity is then captured by the conductive components in the solar panel before they’re routed into the rest of the solar energy system. 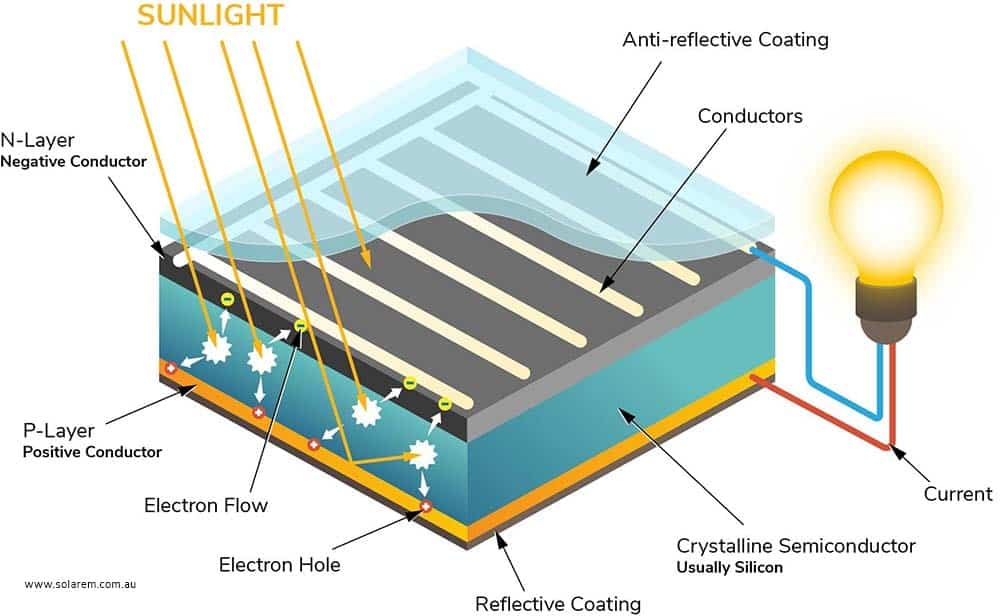 The electricity created by a solar cell is direct current (DC) electricity.

However the homes and businesses in Australia (and all other countries) are wired for alternating current AC electricity.

For this reason, the DC electricity originally created in a solar cell must be turned into AC electricity through the use of a solar inverter.

To learn about the science behind how solar panels work, take a look at the video below. This will give you a good idea of the physics behind how the panels’ components and construction converts sunlight into electrical energy.

The video below gives great insight into the science behind the properties of a solar panel and how it converts sunlight into electricity.

The Role of a Solar Inverter

A solar inverter is the piece of your solar energy system that converts the DC electricity into AC electricity.

Not only does a solar inverter convert DC into AC, but it also keeps track of all the important information related to the solar system, including voltage, current, power production, and more.

For this reason, most experts consider the solar inverter as the brain of the solar energy system.

Traditional solar energy systems used a single central solar inverter. This inverter converted all the electricity passing through the entirety of the solar system at a single point.

With individual micro-inverters, an entire solar panel can stop functioning without interrupting the rest of the system.

Batteries to store solar energy aren’t as popular as you might think.

The majority of solar energy systems in Australia are connected to the normal electricity grid.

This has two benefits. First, it enables excess solar electricity to feed back into the power grid, often for a credit on your energy bill. Second, it enables you to draw electricity from the grid when you need more electricity than your solar panels are able to produce.

This process of giving away extra electricity and taking needed electricity from the power grid is billed through a process known as net metering.

An alternative to net metering is to use your own battery. This is most common for households with solar energy systems in remote areas or that are attempting to live “off the grid.”

When a solar battery is used as part of a solar energy system, you’re able to store the excess electricity in the battery rather than send it back to the grid.

A battery enables you to use the solar energy that your system produces at night, during inclement weather, or in high usage times.

Another big benefit is the ability to use the electricity stored in the battery as a backup during emergencies such as power outages.

Remember that the capacity of a solar battery is limited. You can only store so much energy within it. For this reason, it’s important to choose one that’s appropriately-sized, based on your individual needs and preferences.

What Is Net Metering?

As explained above, net metering is the process of sending excess solar electricity into the power grid.

Alternatively, it also covers the process of taking needed electricity from the power grid when enough solar electricity isn’t available.

The fact is that the majority of solar energy systems produce more electricity than is needed during peak daylight hours.

Without a solar battery, this electricity is impossible to store. Homes that are connected to the power grid can send this extra electricity back into the normal power grid.

A power meter connected to your solar energy system monitors how much electricity your system sends into the grid. You are then given appropriate credits based on this amount.

When you do need to draw electricity from the power grid yourself, these credits are used to cover the electricity you draw.

Many homes with a solar energy system produce more electricity than they use each month and are given an additional energy credit on their utility bill through the net metering system.

A solar energy system is only as powerful as the number of solar cells it contains.

Because of this, it’s important to consult our experts prior to the installation of your system to ensure that your electricity production potential meets your home electricity needs.

The Future of Solar Power

And, this trend is expected to continue which means a doubling of the amount of solar energy every 3 years.

In addition to the growth of solar power’s popularity in Australia and around the world, the technology itself is constantly evolving.

Even though solar cells will be more efficient in the years ahead it doesn’t pay to postpone installation. Consider that in Australia an investment in solar pays for itself in as little as 2 years and in that same 2 years solar panels may increase in efficiency by 10% which in turn means they become 10% cheaper. So you could:

From Solar Panel to Home Electricity

Unlike coal and other fossil fuels, there are no harmful emissions when taking energy from the sun. Energy levels received by the solar panels varies throughout the day and year for various reasons.

Using the processes outlined above in the science section, the photovoltaic cells generate Direct Current (DC) electricity from the sunlight.

DC electricity is received from the solar panels and converted to AC electricity to be used in your home or business.

With net metering, any electricity not used by your home or business is sent back to the grid and spins your meter backwards. If your energy needs are greater than the output from your panels, you will receive energy from the grid.

The main components of a solar energy system are the solar panels.

Each panel contains an array of photovoltaic cells that are capable of capturing energy from sunlight and transferring it into an electrical current.

The number of panels your system has directly impacts the amount of electricity it’s capable of producing.

The solar inverter is additionally responsible for monitoring all information, including power usage, related to the entirety of the system.

Although not common on many home solar energy systems in Australia, a solar battery can be used to store excess electricity for times when solar energy isn’t available.

Most homes with a solar energy system utilise an energy meter or power meter.

This energy meter monitors your homes production of solar electricity as well as its overall energy use.

An energy meter is vital if your home is connected to the power grid. It monitors how much extra energy you send into the traditional grid and how much you take from it. It’s a vital component of net metering.

Many homes with solar are connected to the traditional power grid.

This connection enables you to send excess energy back into the power grid for an energy credit. You can then use these energy credits to pull electricity from the grid without paying or to get an additional credit on your monthly electricity bills.

Although a connection to the power grid isn’t absolutely essential, it is very common for homes in Australia.

Solar energy is rapidly growing as one of the most popular alternative energy sources.

And the reason for this growth is simple – solar panels provide an easy and efficient way to both lower your home electricity costs while also minimising your environmental impact.

Will Solar Work For You?

Contact us using the form below and our experts will get back to you with a proposal that best suits your home or business needs.